York Art Workers’ Association YAWA celebrates its 25th Anniversary with an exhibition by the CBS at Pyramid Gallery. The association has invited the CBS to select work submitted by its members for a special exhibition that coincides with it’s keynote lecture to be given by CBS chair Angela Cork. The lecture will start at 7.30pm in Bedern Church Hall

Following a conversation with an artist who was losing their sight, Annabel Hood has created a collection that was inspired by braille and how with touch we understand and confirm what we see. Her latest collection, of which this beaker is the starting point, focuses on the comprehension and distortion of non-verbal languages; transforming them into tactile surfaces on drinking vessels.
Through handling these vessels, the distorted messages create a debate on what is accessible language and underlines haptics as a means of communication or exclusion: the limitation of comprehension.
The “With touch there is greater adhesion to the truth” beaker was inspired by Annabel’s findings; that only a tiny proportion of the visually impaired population can read braille (less than 2%). She highlights this situation by using Guiseppe Penoni’s quote “With touch there is greater adhesion to the truth” which is chased in braille into the upper section of the beaker. This piece has been created to deliberately engage the user, both by touch and smell – the user’s fingers naturally position themselves on the braille and dimple beneath. This beaker forms the key starting point of the collection, with Annabel developing from braille a ‘universal’ simplified haptic code for later works.
Through the entire collection of 8 pieces she explores braille, morse code, binary code, soundwaves and cymatics. It was exhibited at Young Designers 2018. The collection won several industry awards including Contemporary British Silversmsmiths’ ‘Design in Silver’ award and The Incorporation of Goldsmiths ‘Outstanding Scottish Student of the Year’ award. A braille wine goblet developed from this piece has been commissioned for the Incorporation’s collection. All pieces from this collection were made and hallmarked in Edinburgh.

Functional pieces of art for the kitchen. These pieces have been hand forged from sterling silver to create beautifully balanced and weighted serving, straining and saucier spoons.
Attached to a holly branch handle that has been seasoned, sanded and oiled to give a smooth silky texture and a layer of protection when being used. The wood is hand-picked by Charlotte for the function of the utensils and pairs wonderfully with the silver. Stunning set of cutlery for the connoisseur and food enthusiast out there. Supplied with care of guide leaflet and a care package consisting of a cloth and bottle of oil for upkeep of your special utensils. Perfect for many occasions ranging from anniversaries, Christmas gifts and that special treat for yourself.

While travelling I came across a bush that produced a fruit similar to quince, its protection was provided by amazing thorns. The end of this spoon is decorated with one that I cast in silver.

The Bayonet Container is part of my ‘Container Collective’, a collection of containers that are made of multiple parts which are satisfying when opened and closed. The piece was inspired by interaction and designed around simple mechanical movements and mechanisms.
The container was made during training I received from Silversmith Rebecca de Quin where we explored different patination techniques.

Jen was drawn to the traditional technique of hand-piercing from the moment she learnt it over 10 years ago. Initially, she cut crude shapes from base metals. Today, she is more accurate with a saw blade than with a pencil and she is always trying to challenge herself further.
The Countryside scene wine coaster has been completely hand pierced by Jen. She begins her design with a line drawing of her chosen scene. For this wine coaster Jen was inspired by her surrounding of the great British countryside, it is where she feels happiest and so she wanted to portray that in some of her work.
Once Jen is happy with her line drawing she applies this to the sheet of silver, she then accurately follows her drawn lines and pierced out each intricate section. Once she has completed the base layer she then pierces out finer detail and solders these onto the pierced design to create as much detail as she can in the piece.
When Jen has completed piercing and soldering the design she shapes it into her desired form, she’ll then solder and constructs the piece.
The wooden base was hand turned from black walnut wood. Jen loved the contrasting dark matte wood against the bright reflective silver. This chunky base was made to look like the silver scene has been pushed down into the wooden. Jen attaches the two together with hand-made silver screws.
She is often asked why she cuts each piece of silverware by hand when laser cutting is available. Though it is time-consuming, the heritage skill of hand-piercing captivates her. She loves the character it creates in each unique piece; as if it is a sketch in sterling silver or gold and the intricacy she can create, over the years she has been able to pierce shapes finer and therefore improve the derail in each piece she makes.

This piece is a work in progress. It is a dish or basket made of forged wire in flowing linear patterns. The form although roughly rectangular has gently curved hollow form. The finish will be matt on the side and polished on the thinner top edge on the inside of the dish.

Inspired by optical communication, Karen Westland utilised the traditional scoring & folding technique to manipulate silver sheet into distorted waves of light in the panels of the vase. This work was made in Glasgow & Shetland then hallmarked in Edinburgh.

Light gauge silver sheet, inflated by hydroforming, is juxtaposed with the heaviness of the sand cast rim and base

Perspective Box is a 3D interpretation of the box drawn on paper and in perspective. As it is a free standing object it takes the viewer by surprise especially as it appears to defy gravity.

The ‘Fallen leaves’ vessel is part of my Fragmented memories collection. The South African landscape and my mother’s garden are my sources of inspiration. This vessel aims to communicate the fragmented and sometimes ambiguous memories of my childhood in South Africa. Leaves that remind me of home have been used to translate my memories into a tangible object. Transformed into metal through the process of casting, these leaves are an imperfect and evocative memory of the original form and encapsulate the ephemeral nature of my memories.
The design for this vessel was chosen for the precious metal bursary award 2018.
Assayed and hallmarked by the Edinburgh Assay office this vessel pays homage to my grandmother’s Scottish heritage. 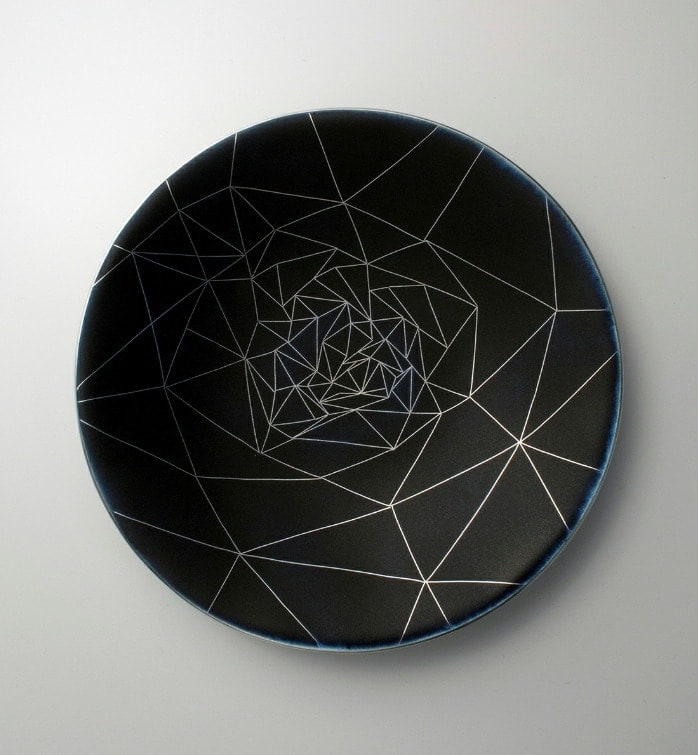 A drawn connection is about making connections from one place to another, how routes and maps in space can be made from point to points joining up – of which are dawn into a work or art and science the map. Made by pushing boundaries of the Cloisonné enamelling technique, using  0.15mm  fine silver wire – clear transparent dark blue powder glass and fired in a kiln at 900 degrees over 20 times which gives piece is complexity in depths of colour. Made completely by hand in my workshop in London dawn connections is unique work of art.

Vase with Blue Collar is a two-part piece comprising a silver vase and base metal collar or sleeve.
In this piece, precious and non-precious metals are presented in a symbiotic relationship, which seeks to create visual interplay of colour and form.

The vivid blue patination of the collar presents a dramatic contrast to the polished surface of the vase. Both parts are oval in plan and have stepped rims which echo each other but are not identical. While the vase is a watertight vessel the collar is not and is therefore limited in its purpose, serving as a subsidiary element to the vase as a collar is to a dress. The relationship between the two forms can be explored through positioning. The vase fits inside the collar but can be set alongside it to generate alternative views.
Notions of value are introduced through reference to architecture, the silver vessel alluding to the inner sanctum of a tower perhaps. Value is also questioned through the use of the combined precious and non-precious metals and the finishing treatments applied: achieving the high polish of the vase and the blue patination of the collar represent similar levels of challenge and could be considered equally alluring by the viewer.

Influenced by minimalist art and contemporary architecture, Sheng Zhang’s table sculptures explore themes of space, volume, silhouette and boundary. Indentations accented with gold grain in some works intend to convey a sense of integrity, connect positive with negative space which the objects dominate as well as question the role of function in artwork.

An experiment in deep chasing to investigate how far the silver can be manipulated.