You are here: Home › Events › Uncategorised › A Journey to Shetland – delivering ‘Dragon’ April 2019

The sculpture is too precious to be sent by carrier. It has wings, arms and a long curly tail that could snap off if the box is dropped, so Terry has decided to deliver it in person. The journey starts with careful wrapping and placing in a box. The padding is carefully positioned to ensure that pressure is not placed on vulnerable parts. It might have to survive a rough sea crossing!

Terry with Dragon and box. On the walls are lino cut prints by Sarah Cemmick

Testing the box for size 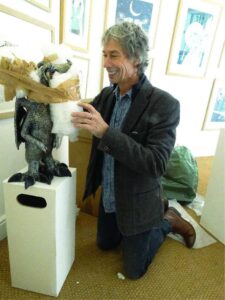 careful positioning of the padding 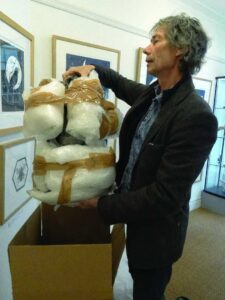 Hopefully the padded dragon will still go in the box! 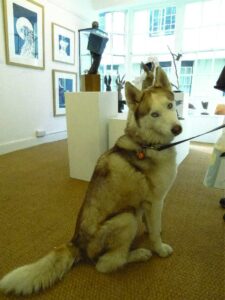 a beautiful Husky suddenly appeared. Do they use Huskies in Shetland by any chance? 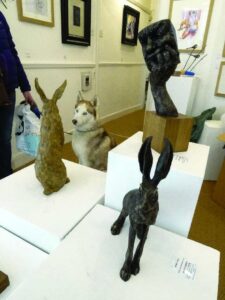 Snow? no, packing chips made from potato starch. Snow would not do for packing a dragon – it would melt

Adding the finishing touches to Dragon’s box. (It is only fair to warn people of its contents) 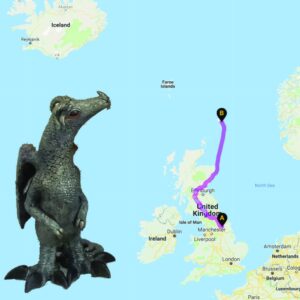 The route – if going by car. We are going by train which follows the east coast up to Edinburgh