Every 4 to 8 weeks, a portion of our front window is dedicated to a selected jeweller who has previously exhibited at Pyramid Gallery.

Ruth Claydon (Moth and Magpie)
Allure! Jeweller of the Month 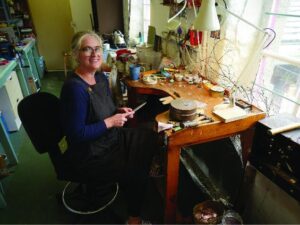 In 1994 Pyramid Gallery changed hands to become owned and managed by Terry and Elaine Brett. Very shortly after hand-over,  in June 1994, Terry and Elaine were visiting friends in Hebden Bridge and enjoying a walk along the canal at Hebble End, when they spotted the jewellery studio of Kate Rhodes. Kate knew of Pyramid Gallery and was pleased to be told that her work was very appealing and would be well received in Pyramid Gallery.
‘Our friends were astonished that Kate agreed there and then to supply some of her work, ‘ recalls Terry. ‘ Kate gathered together several hundreds of pounds worth of jewellery and simply handed over the bag, with a list of the items and prices. All on approbation’.
Since that date, Terry has made sure that there is always some of Kate’s work on display. She is one of the best selling jewellers over the span of 25 years. Terry is celebrating his 25th year running Pyramid Gallery and delighted to present this substantial collection in our Allure! window display. 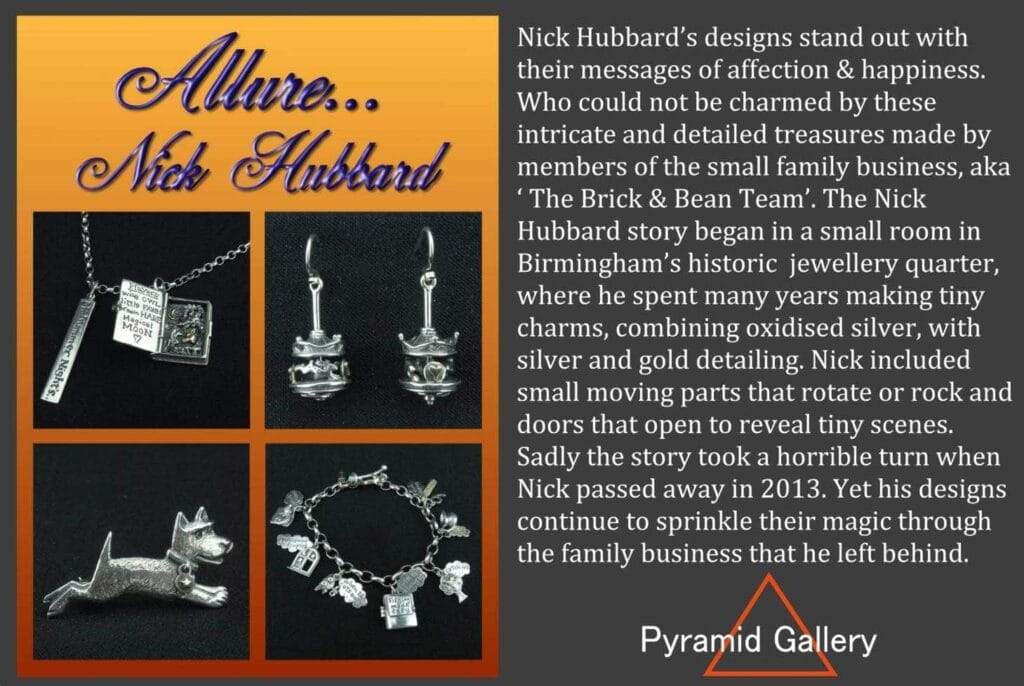 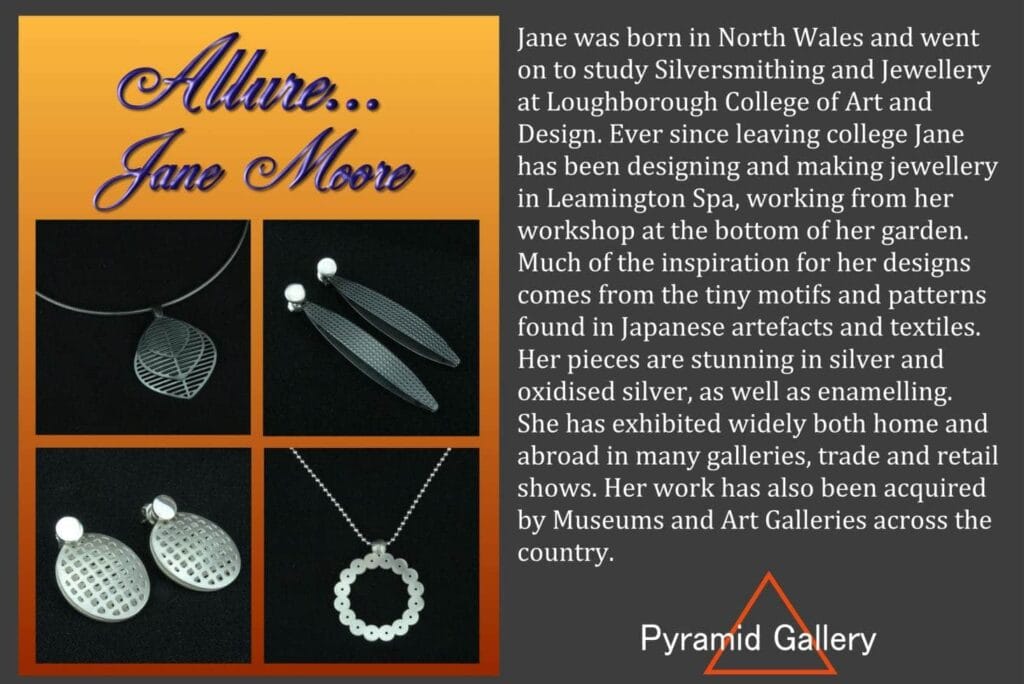 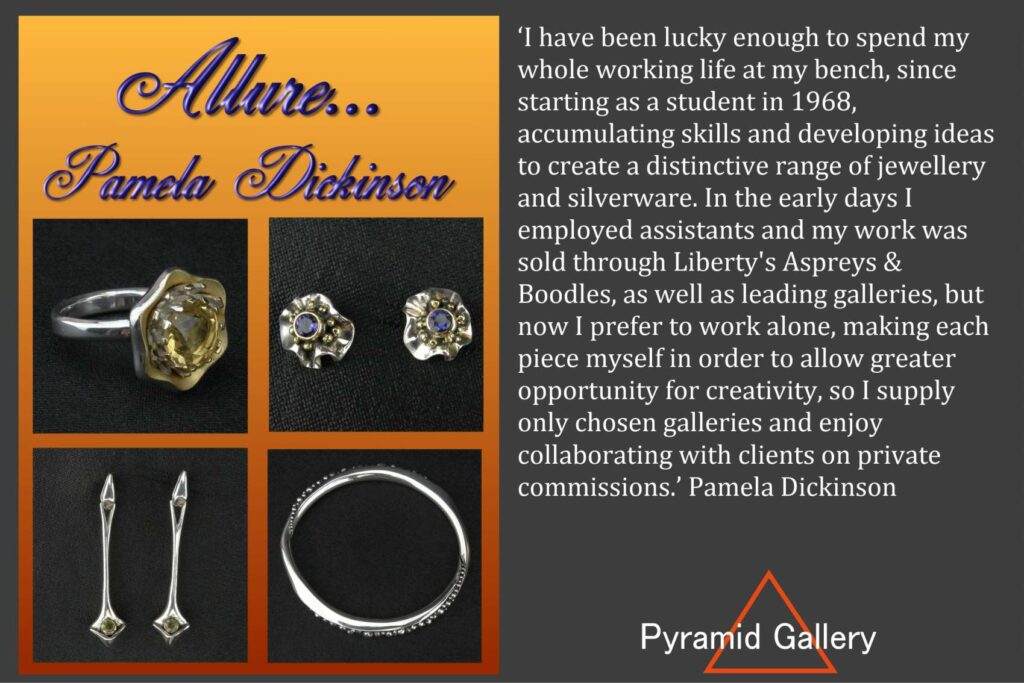 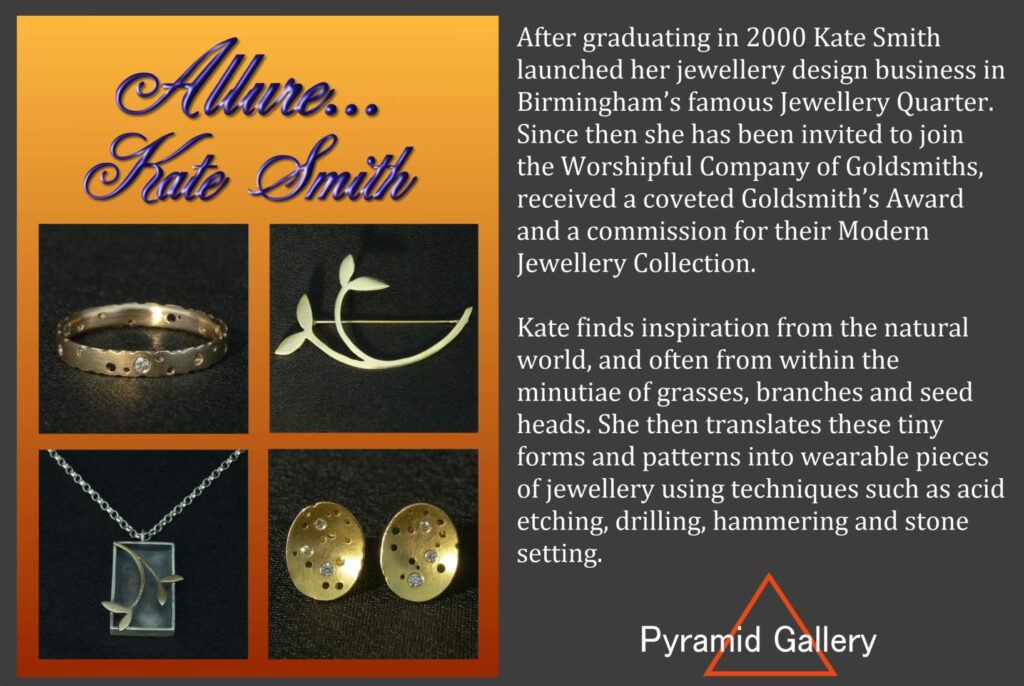 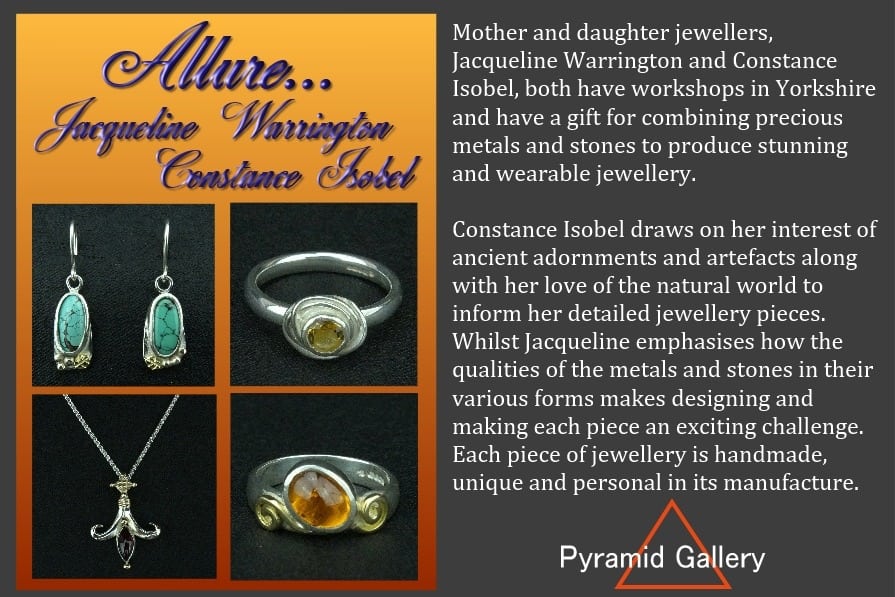 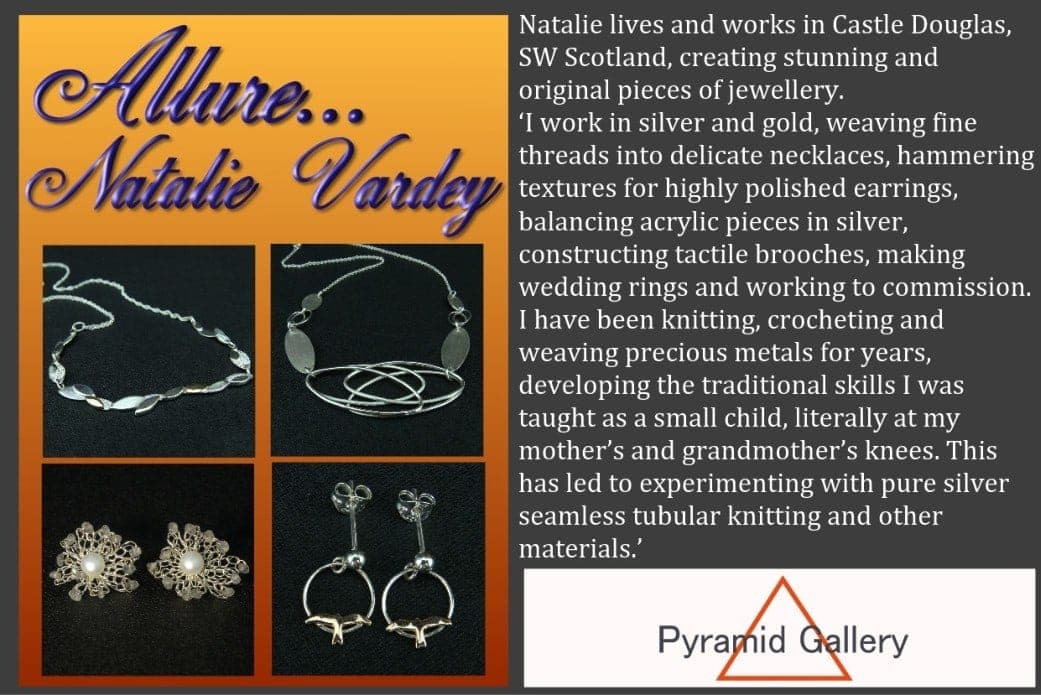 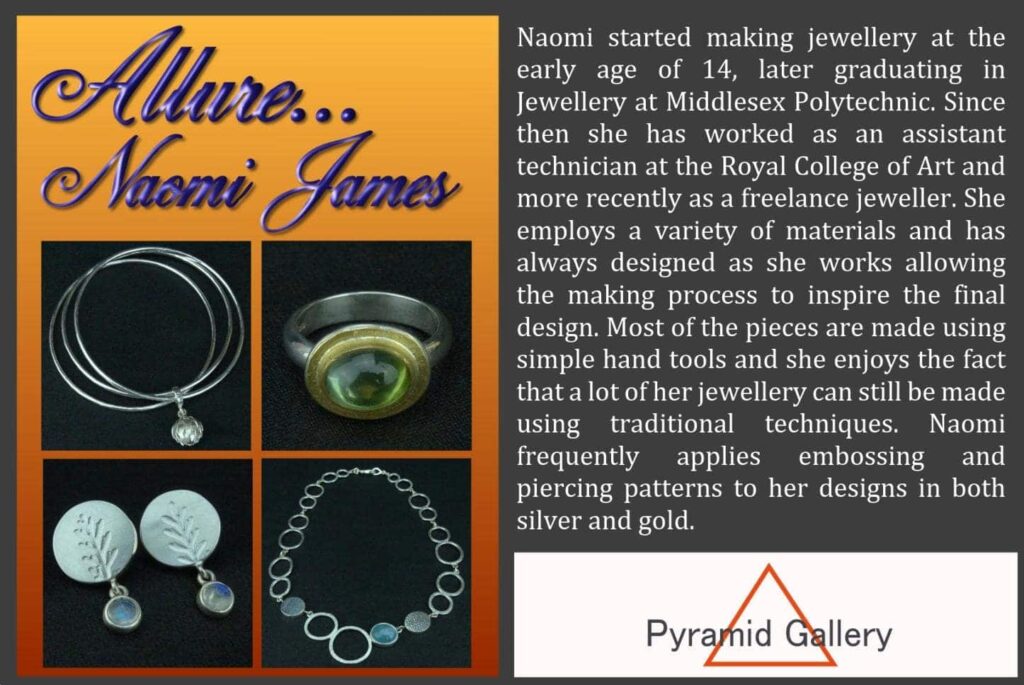 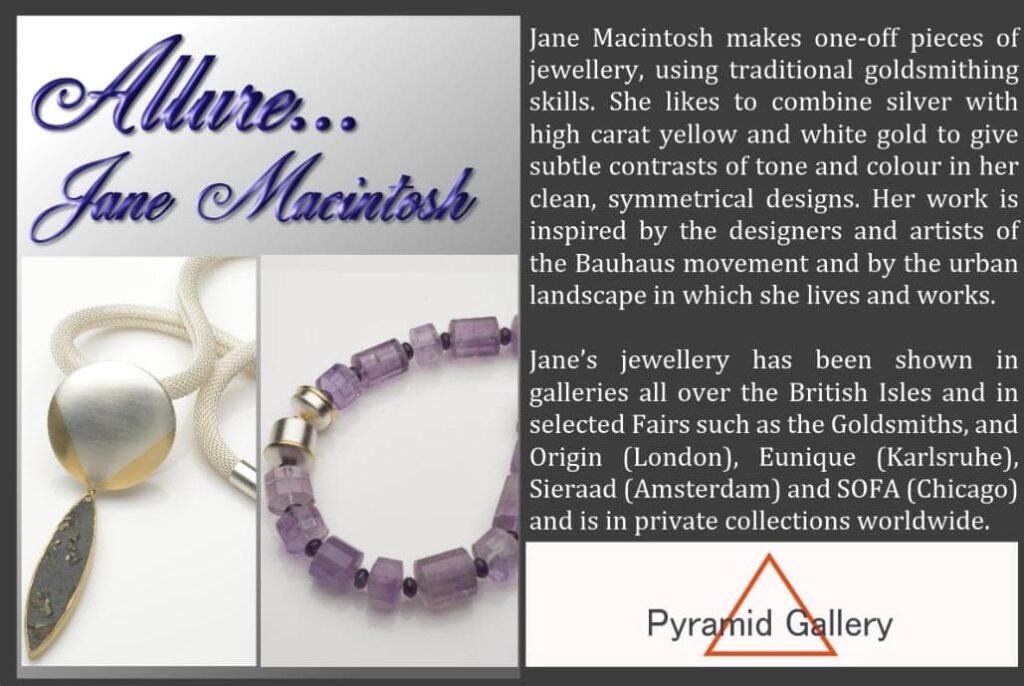 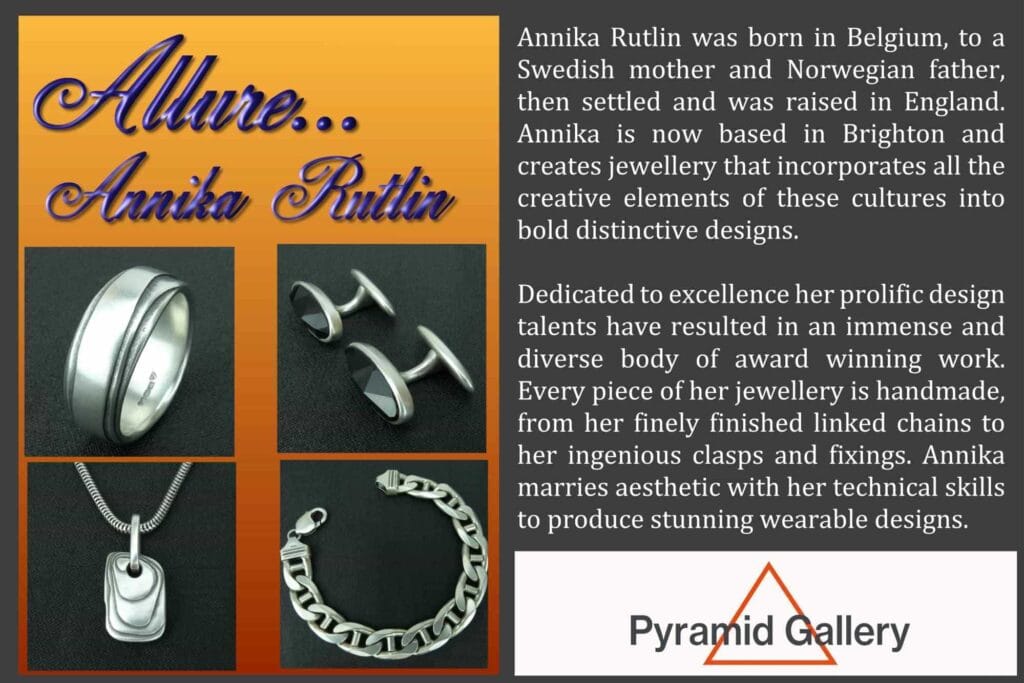 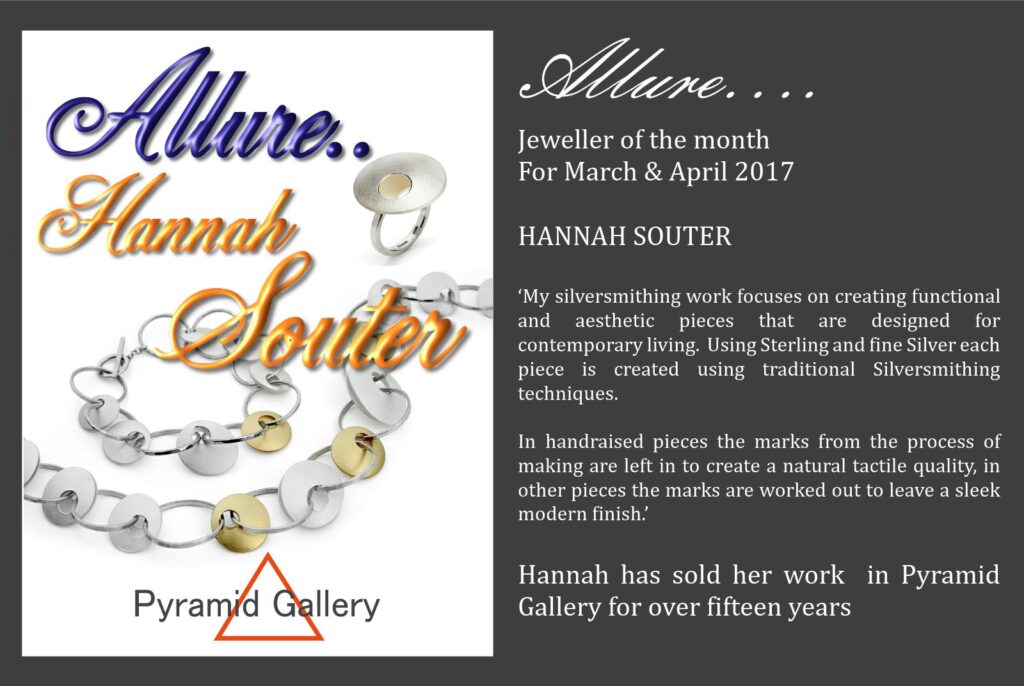 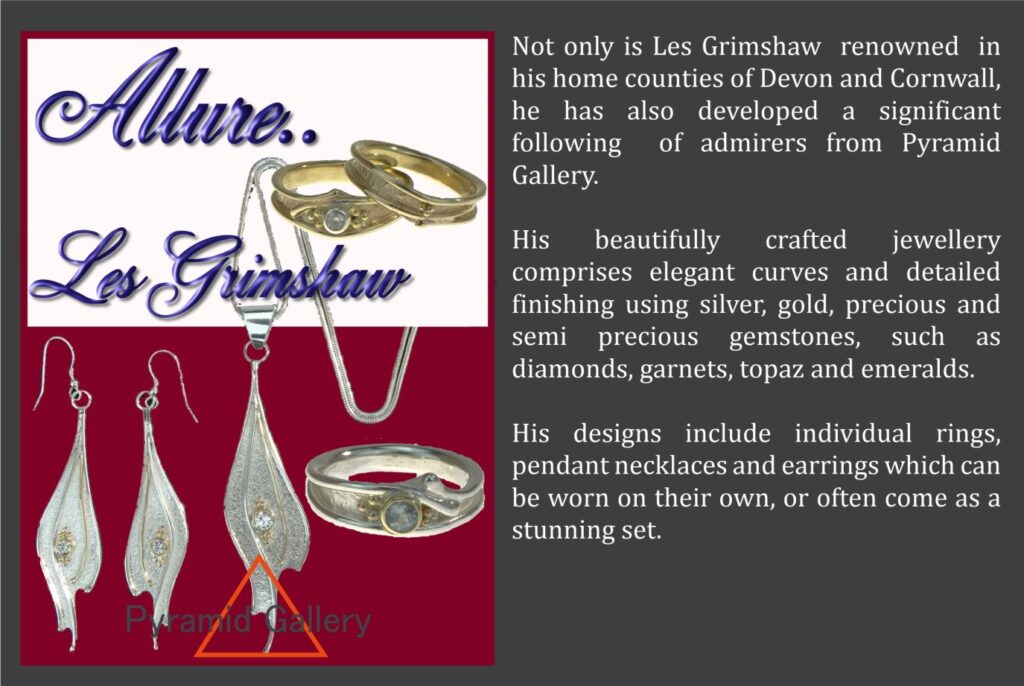 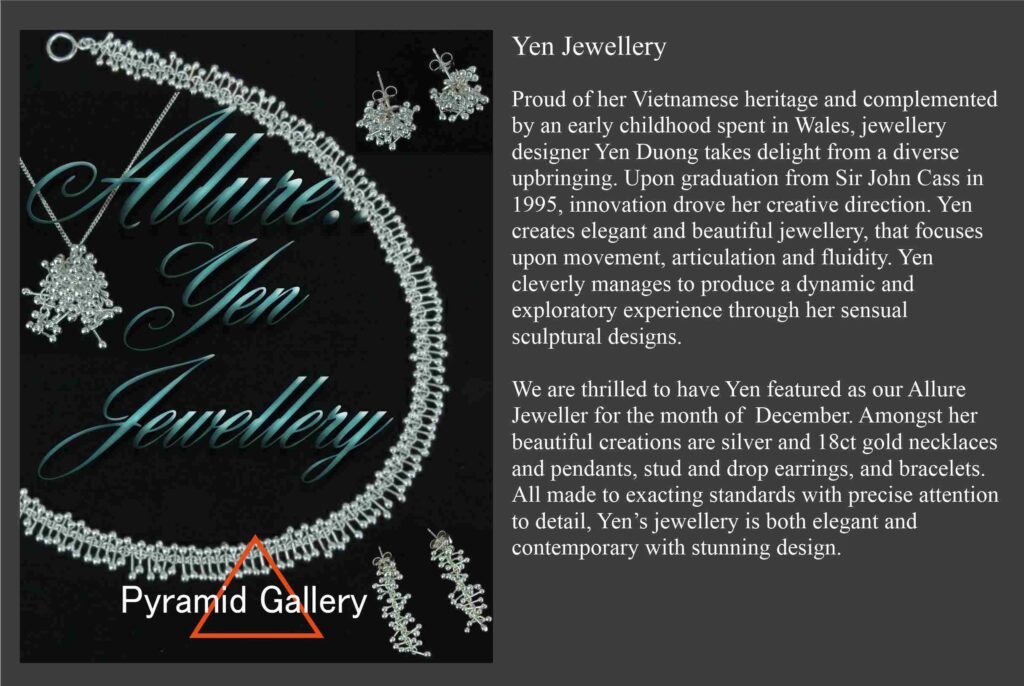 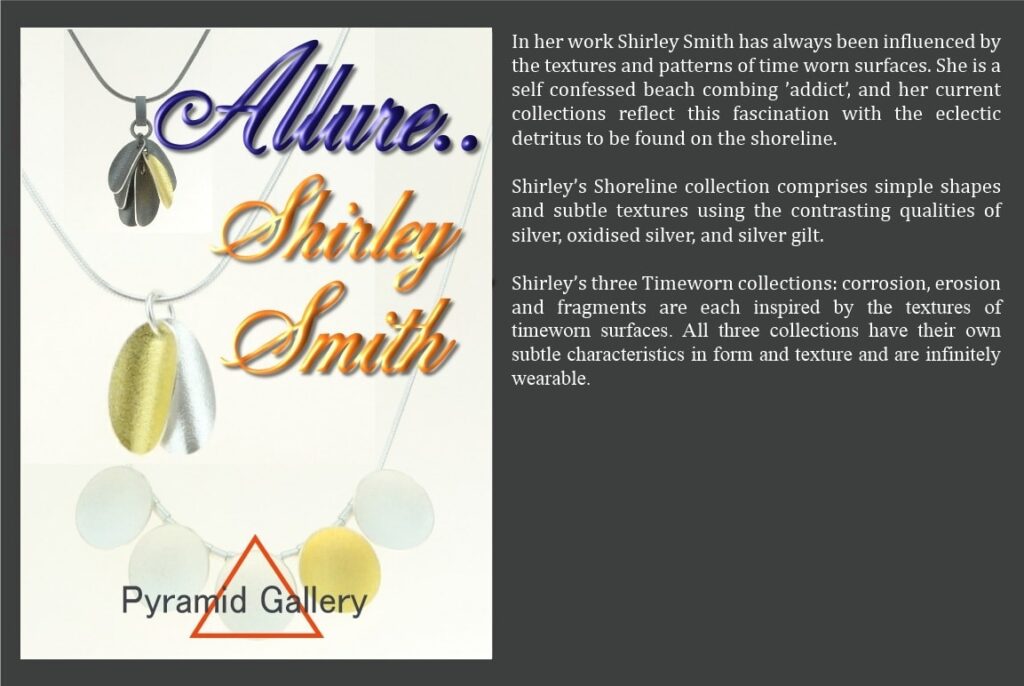 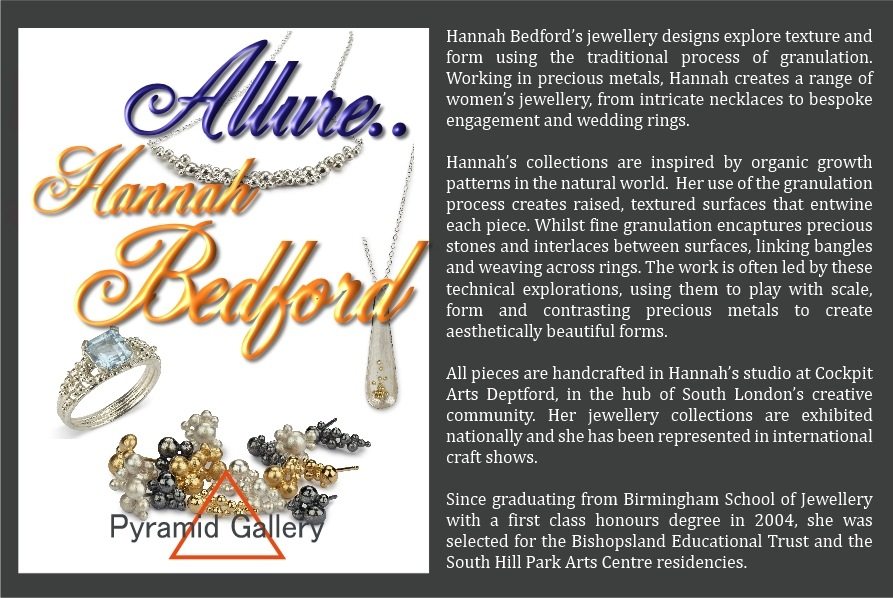 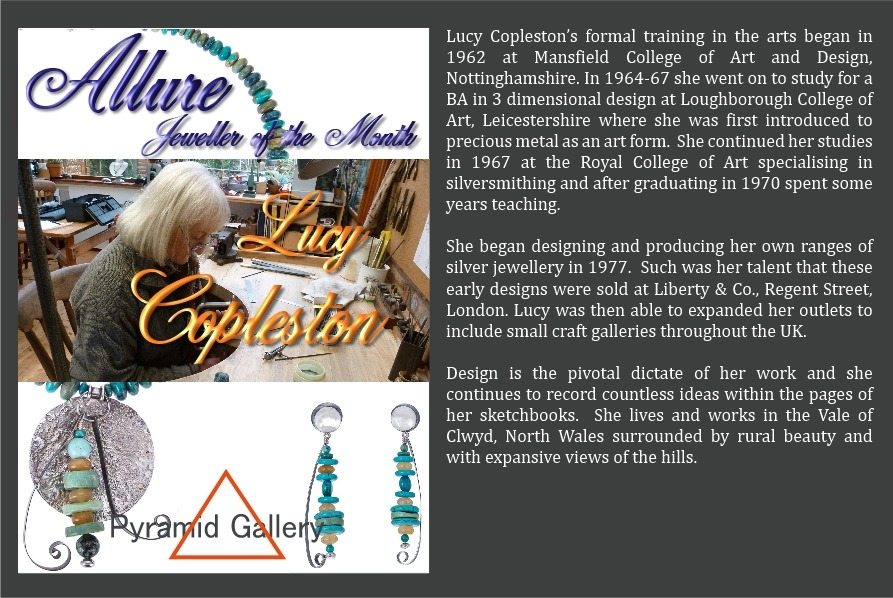 Karen Thomas is a jewellery designer & maker, originally from the Midlands, who has been living & working in York for over 17 years. She graduated from Birmingham School of Jewellery (UCE) in 1998 with a BA(Hons) degree in Jewellery & Silversmithing. She has worked in busy trade workshops & taught jewellery making at a local college & school, while also producing her own designs. She now concentrates solely on creating her beautiful, wearable jewellery. Using traditional techniques; mainly working in silver sometimes in gold she makes limited editions, one off pieces & commissions, which she sells through galleries across Europe.

“I love the process of creating, wearable pieces of jewellery, be it constructing a mount for an unusual stoneor handcrafting a master, making a mould & running off waxes to generate cast units so I can produce ranges of silver jewellery that are affordable.

My designs are inspired by the world around me. Whilst studying in Birmingham many of my pieces echoed the city’s industrial past. Now in North Yorkshire I take inspiration from the landscape & its colours, from the coast to the moors & dales.”

Ian Simm and Debbie Moxon trained at Sheffield for  BA(Hons)  Silversmithing and Jewellery, graduating  in 1981.

They established a workshop in Pateley Bridge in 1982 and started selling their  high quality designer jewellery. Their first gallery was  Robert Feather’s Pyramid Contemporary Craft and Design in York in the same year. The gallery renamed to Pyramid Gallery when taken over by Terry and Elaine Brett in 1994 at which point the pair decided to sell through the newly opened Robert Feather Jewellery in York until he closed the business in 2008. Continuing their tradition of selling in York (unbroken now for 33 years) , Moxon and Simm once again supplied Pyramid Gallery. They have continued to do so ever since and this is the third time that their work has been chosen for the accolade of ‘Allure: Jeweller of the Month’

The uniqueness of each piece and  the labour intensive nature of making and finishing ensures that production is limited and this in turn makes the jewellery highly desirable for collectors of quality handmade jewellery.

A refractory metal. A metal that is strong and light and has the intiguing quality of colouring permanently by heating or anodising.

Debbie  developed her techniques for heat colouring titanium over the last 25 years. and has received funding from the Arts Council  for research and development into the heat colouring of titanium.

A degree of chance is integral to the colouring method, so each piece is carefully considered. Ian’s expertise in precision cutting make possible the level of quality for which they are known.

Helen Lea works from her jewellery workshop in the heart of Birmingham’s Jewellery Quarter.

Her jewellery is inspired by animals and nature, each miniature Silver animal is modelled by hand to give it a  special character. These creatures are then made into pendants, earrings, charms & bracelets. Helen also makes larger pieces where the animals are placed into miniature three-dimensional scenes representing their natural habitats in a fun and stylised way.

Helen likes her jewellery to be cute, fun and quirky with the ability to raise a smile!

After graduating at the Polytechnic of Newcastle-Upon-Tyne with a BA honours
degree in Designer Craftsmanship, I began to develop my interest in pattern
and its application in jewellery by making work that used patination on the
surface of non-precious metals such as copper and brass.

Since 1994 I have been at the Rosehill Workshop in Brighton and by 2001
had begun to specialise  in the use of hand dyed anodised aluminium as I
really loved the potential of the material to produce jewellery in geometric
shapes that also retained an individual interest.

By painting the aluminium freehand to give a unique watercolour effect to
each piece before cutting, shaping and finishing my jewellery has developed a particular style; work that is essentially light and colourful and contains the
inspiration of land, sea, and skyscape

The jewellery is made in anodised aluminium combined with silver.

Pre- anodised sheets of aluminium are dyed freehand and the colours diluted to achieve a watercolour effect giving them more depth and subtlety. When the sheet is dry, it is boiled to seal the colour permanently into the surface.

Once this is done the sheet is ready to be cut up into jewellery. The pieces are milled to add a texture to the surface, shaped, and the edges are polished. The aluminium is then combined with silver either by riveting or using folding techniques.

All the wires and chains are made from sterling silver.

John and Dawn Field are based in West Yorkshire, where they work both collaboratively and on their own individual pieces. John’s work is individually designed and one-off.  Rich natural colours and materials feature prominently in all these pieces, and are supplied by using exotic woods, amber, precious and semi-precious metals and stones. As a contrast to John’s more abstract work, Dawn draws on her Fine Art background and uses strong imagery in her jewellery. Over the years the theme of mythical animals has reoccurred in Dawn’s work. Recently for example, she has based some jewellery around the image of Pegasus.

The asymmetrical metal range is an example of John and Dawn’s collaborative work. Textures in the form of stencils are rolled into silver, which then has other shapes soldered onto it, then rather than making matching partners, one earring will have a vibrant, rich coloured stone attached and the other will have decoration in the form of some brass loops.

Sally has been designing and making jewellery since 1987. Her early years were spent running around fields in the countryside near Ruthin, North Wales. Lovely memories, shared with family. Now, having learnt to appreciate the countryside her designs have developed around this fascination of nature and its strengths, growth, decay and designs.
Sally works mainly in silver, reticulating the surface to give a more natural, organic feel to her pieces. The jewellery and artwork is embellished with gemstones and gold detail.
All the work is made in her Sheffield workshop, behind Gallery 33.
.

Between January and March 2015

Hand crafted modern jewellery for men and women in sterling silver, gold and 22ct gold plate. All pieces are originally designed by Faith Tavender and made in Britain.

After graduating with a BA (Hons) Degree in Jewellery and Silversmithing at Sir John Cass, London, Faith set up her own business and has been making high quality jewellery for selected Galleries and Boutiques since 1994. Selling her work in England, United States, Japan and Australia.

Faith is inspired by nature from her childhood home of Tasmania, her love of ancient Greek jewellery and museum artefacts from around the world.

Feminine and elegant collections for women incorporate highly decorative floral charms with beautiful semi precious beads and stones. Exploring the textural qualities of silver and gold with geometrical shapes and surface patterns Faith has created collections for men and women. Producing bold and unique jewellery with ranges of rings, cufflinks and necklaces.

Every piece is hand crafted in her London Studio using only the highest quality materials.

Faith’s jewellery has been worn by Robbie Williams and Louise Rednapp and featured in Magazines such as Red, Marie-Claire, Arena, The Sunday Times, The Guardian, The Telegraph, Retail Jeweller and GQ.

Published in Jewellery Design – The Artisan’s Reference by Elizabeth Oliver and The New Encyclopaedia of Jewellery Making Techniques by Jinks McGrath. 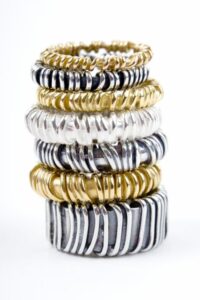 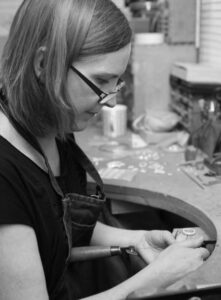 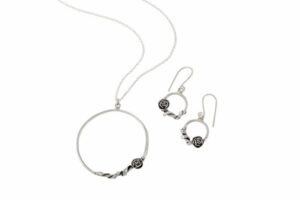 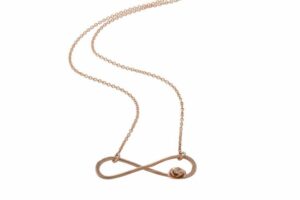