Anita Klein has very kindly donated a prize of a small etching or lino (of the winners’ choice up to the value £96).
To enter this competition and be in with a chance of winning one of her small prints, please use your Instagram , or Facebook or Twitter account and post an image of your favourite @anitakleinart painting or original print (either in your own home or from here or Anita’s website Anita Klein)
Then add a few words to describe why you like that picture and/or what it means to you

For your entry to be included in the prize draw, it is essential that you include the links

We will not be able to see your entry if the links are not included.

For each correctly linked (with @ and #) entry that we receive,  we will make out an entry ticket that will be included in a draw.  The winning entry will drawn by a member of the public. The competition is not open to any employees of Pyramid Gallery.
The draw will take place in Pyramid Gallery on 24 December 2019 at 1pm and the winner will be notified via their social media account and also on  three  pyramid gallery   social media pages and Anita Klein’s Instagram page
To view the Pyramid Gallery Facebook page , please click HERE
To visit Anita’s web page please click HERE
We will also accept entries made by sending us an email – we will then post the entry up onto social media 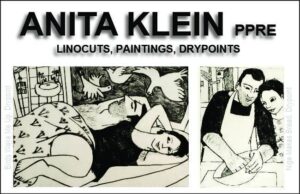 Anita Klein is a regular exhibitor at Pyramid Gallery and has been represented in York by the gallery for 25 years. The body of work she has produced over a 35 year career includes what amounts to a personal diary of her family life. Her relationship with husband Nige and their two daughters have been followed by collectors of her work. Those same collectors are now following the expanding family with the birth and early years of grandchildren. Other subjects include Angels enjoying the fruits of  earth and many places travelled by Anita and Nige.

Anita Klein studied at Chelsea and the Slade schools of art. She is a fellow and past president of the Royal Society of Painter Printmakers (RE) and her work is in many private and public collections in Europe, the USA and Australia, including Arts Council England and the British Museum. She divides her time between studios in London and Anghiari, Italy.

“Ravel said he wanted his music to be complex, but not complicated. Anita Klein might say the same of her art. There is a grand simplicity to her works, but that is not the same as saying they lack subtlety and ambiguity. On the contrary, they have the sort of unselfconscious directness that comes from living and breathing art for so long that it becomes second nature” – John Russell Taylor