You are here: Home › Events › Art Exhibition Events in York › the CHRISTMAS COLLECTION 2017 with ANITA KLEIN

Opens on Saturday 2 Dec at 12 noon

At a time when the art world seems to be full of artists attempting to shock and denigrate, Anita Klein’s intimate, life affirming work comes as a welcome breath of fresh air. Her personal celebrations of everyday living rendered with humour, sensitivity and beauty reveal a joyful delight in the ‘dailiness of life’* (*Mel Gooding, ‘Anita Klein Painter; Printmaker’). Anita’s art is an archive of personal moments that everyone can identify with. Witty, charismatic, warm and poignant, she is one of Britain’s finest and most prominent artists and printmakers of the 21st century. 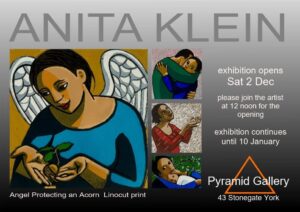 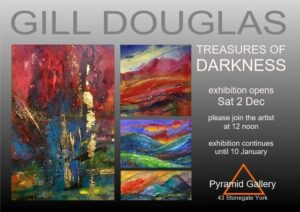 Born in Newcastle upon Tyne, Gill Douglas  worked variously as a secretary and a social worker before completely changing direction at the age of 27.

After five years at art college, in 1976 she qualified with a Diploma in Theatre Design at Nottingham and then came to York to work as a designer for the Theatre Royal for a year.

A period of freelance designing followed and in 1989 after a lengthy time of illness, she began to paint again and started working full-time as an Artist and Theatre Designer. By 1998 she was painting full-time . Since 2004 she has been studying for a Diploma in Printmaking part-time at York College. Now having bought her own printing press she works as a Painter/Printmaker from ‘The Lighthouse’, her studio and home, high above the bustling streets in the heart of York.

and featuring the work of