TICKETS are FREE from Pyramid Gallery

(donations invited at the event) 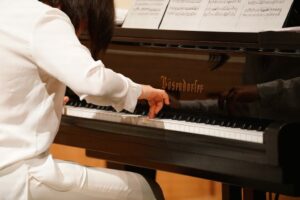 Nika playing the Bosendorfer at The National Centre for Early Music

Nika’s academy has so far performed ‘Alice’ at events in London and Leeds with
young performers who are fee paying full time students of the academy. The aim is
to bring Alice in Wonderland to York with local performers involved.
Monies raised for a ‘Young Talents’ trust will be used for scholarships.
Pyramid Gallery is sponsoring this event on 27 Jauary 2017  by paying for the use of the concert hall at the NCEM

Nika gave  illustrated lectures on Classical/ Romanticism and earlier about the Baroque period and the influence of J S Bach on Mozart and all the classic composers of piano music since. It was very informative and helped illustrate how Bach structured his pieces and established a format for all the different classic genres of piano music. Having studied this subject for her PhD at the Royal Academy, Nika’s presentation was both informative, passionate and easy to follow, though I would be hard pushed to put it all into words.

She will continue that thread into the next era, dominated by Beethoven and Chopin.

After Nika, the piano itself and the acoustics in the ancient church are perhaps the real stars of these performances. For me it is the intensity and clarity of the sound and the reverberations and harmonics of the instrument that make the recital such a deeply moving experience. Without the sublime touch of an accomplished player though, the instrument and the building would be nothing. This is what makes live performance so exciting, the fusion of materials and design of the space and the piano with the passion and skill of the performer create a sound and an atmosphere that can only be appreciated by being at the event.

The audience itself is part of this wonderful fusion. The presence of our bodies gives a warmth to the sound and the reaction of the audience creates an ambience and sense of appreciation that encourages and rewards both the artist and the audience. And this is why so much passion and effort has been expended by human society of hundreds of years to develop the piano itself and write, arrange, interpret and perform these great compositions. And that is also why Nika wants to give her  time for free and share her experience with you at the recital. Please come and enjoy something truly miraculous and then , if you like the experience, we invite you tomake your donation for St Leonard’s Hospice* in York.  Terry Brett, January 2016

Tickets are free from Pyramid Gallery  – please text 078 0502 9254 with your name and number of tickets. They will be reserved to collect at the door

Nika Shirocorad is playing for no fee

The National Centre for Early Music is offering the building, staff and the piano at their special rate for charity events

Pyramid Gallery is paying for the venue

Geoff Walker is providing wine at close to cost price (If you order some of the wine, Geoff will also make a charitable contribution)

*Feb 2016 : St Leonard’s Hospice was the beneficiary of this recital. This is a change to the original plan.  We had planned this as a joint venture with the York Arts Barge, devising a special project whereby Nika would work with the Arts Barge team with young performers in York. The logistics and outcomes for that project proved to be more difficult to define than was first anticipated. Consequently, rather than raise funds for a project that has not been clearly defined, Pyramid Gallery and Nika have decided to nominate the charity St. Leonard’s Hospice as the beneficiary of this concert. This alteration has been made with the agreement of the Arts Barge Project and funds previously raised and handed over to the ArtsBarge (over £600 from the concert in October) will be used by the Arts Barge with our approval for it’s own programme of community work with young people in York.   Read more about this excellent project here TheArtsBarge . If you would like to support the Arts Barge, they have a great event on Friday 4 March at the Early Music Centre.

Thank you everyone who came to the recital and all the helpers, especially those who worked tirelessly in the kitchen. We had an audience of 158 and raised a total donation of £675 which has been handed over to the Arts Barge Project

Programme for the first Concert on 16 October 2016

Nika Shirocorad – concert pianist, composer
Born in St. Petersburg, Russia, Nika started her piano studies  at the age of 3 .
After graduating from a Conservatoire music education in the USSR, she was invited to the UK for debut solo recitals in 2003 and to become Scholar in Residence at the University of Huddersfield for 2004–5, during which time she studied piano with Jacques Rouvier at the Paris Conservatoire (CNSM). In 2005 Nika gained the Myra Hess Trust Award, the Lord Snowdon Award, the Yamaha Music Foundation of Europe Award  and the RNCM Main Entrance Award to enter the Royal Northern College of Music (RNCM) in Manchester where she completed her postgraduate diploma (under the guidance of Peter Lawson and Norma Fisher) in July 2006.
In February 2006 she won the Chevillion-Bonnaud Prize at the Orléans International Piano Competition for the performance of her own composition Shadows (2006), and in April 2006 gave a debut recital tour in Tokyo, Japan.  She received a commission from the Académie de Villecroze, France, for a new work for piano and CD, premiered at the Salle Cortot, Paris, in March 2007 .  In  November 2008 she made her debut in Sweden, giving recitals in Stockholm’s Royal Music Academy Hall.
In 2015 Nika graduated from Royal Academy of Music (RAM) in London with a MMus degree in piano performance and the LRAM Royal Academy of Music teaching qualification.
Nika has performed as a soloist in numerous international festivals and has played concertos with professional orchestras in Eastern and Western Europe, piano  solo recitals in Japan, including Tokyo Nikkei Concert Hall, Kyoto Concert Hall, and in the prestigious Manchester Midday Concerts Series at the Bridgewater Hall, UK

About the Foundation
The principal aims of the NMTA are to promote culture, heritage and the arts for the benefit of the public as well as providing Musical Theatre Scholarships and supporting projects through the NMTA’s  national and  international  funds and grants. The Trustees welcome applications to support projects in the areas of culture, heritage and the arts and will consider funding towards projects which make real difference to peoples’ lives.
The NMTA Foundation Scholarship is awarded as part of the audition/selection process on the combined basis of merit and financial need. (Please note students will be means tested for scholarship eligibility.)
The Scholarship will fully or partly cover fees only and will be reviewed on an annual basis. There will be one Scholarship available for the year 2016/17.
NMTA fully supports the idea of working with disadvantaged children in order to discover and nurture new talent.
The Foundation believes that in order to maintain vibrancy in the arts, it is critical that the new generation of potential artists is encouraged.
Supporting the Nika Young Talent Foundation
There are various ways you can support us and collaborate with us.
Please contact the school director for more  information.
[email protected]