York weaver Jacqueline James has exhibited at Pyramid Gallery on two previous occasions and was approached by gallery owner Terry Brett to put together a show with other work that would compliment the patterns that are a key to the appeal of her hand-dyed and woven rugs. York ceramicist Ilona Sulikova had recently given a talk to York Artworkers Association about her approach to using repeating patterns on her large hand-coiled vessels. Both Jacqueline and Terry are members of the artist’s networking group and Ilona happily accepted their invitation to be part of the exhibition. Jacqueline also identified Fused Glass Maker Catherine Mahé as skilled exponent of incorporating colour and pattern into her fused and slumped glass dishes and vessels. The three designers met, visited the gallery and began planning their exhibition ‘Colour and Pattern Galore!’ which promises to be an intriguing and delightfully colourful display. 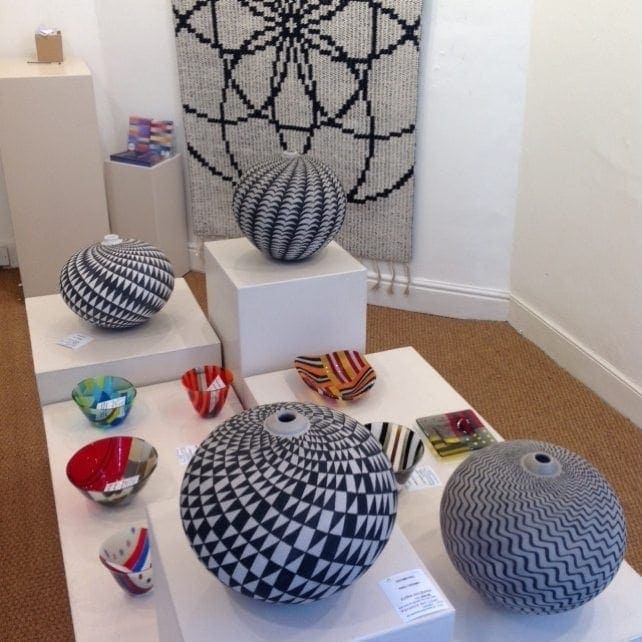 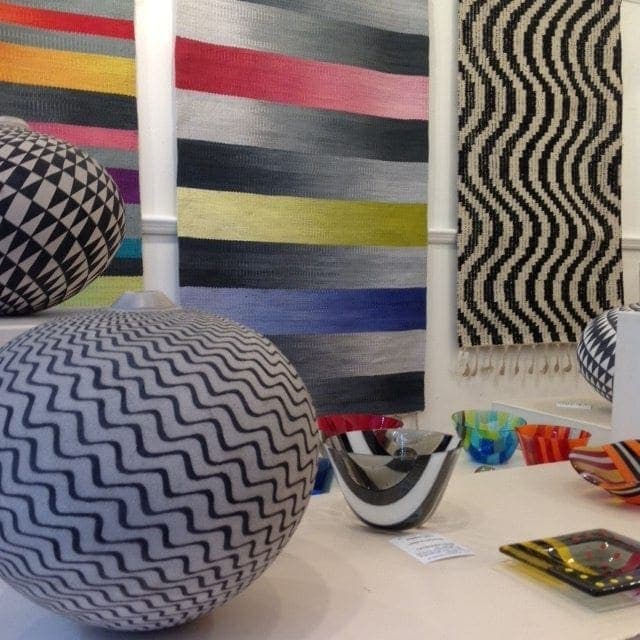 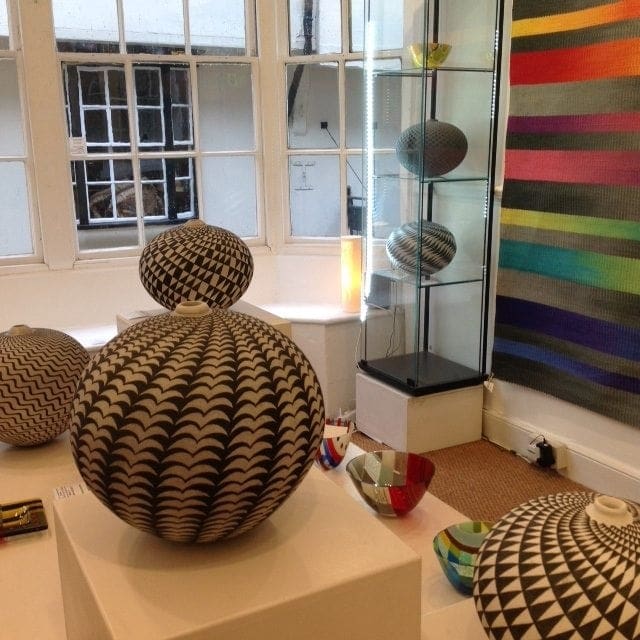 ‘I am pleased to allow the three artists to curate this show together’, says Terry who acknowledges the skill required in making this show harmonious and at the same time interesting and exciting. ‘The challenge is to allow each piece of work to look its best without clashing with other work in the same space. These three artists work with pattern and colour all the time and are the experts in making the display work in a pleasing way. I am looking forward to seeing the result.’

Contemporary glass artist Catherine Mahé is based in Altrincham and has been working with kiln fused glass for over 15  years. ‘I love colour and pattern, a passion which started over 20 years ago on a trip to India and Guatemala and which has stayed with me ever since.
​
‘​I started exploring glass and colour through mosaics 15 years ago and came across glass fusing about 6 years ago as I was experimenting with mixed media mosaics and had the idea of using glass inserts into my work. I bought a cheap, tiny and basic kiln with no temperature controller -it makes me chuckle now that I have a good understanding of how crucial temperature and speed of heating glass are in kiln ​formed glass! I was hooked right from the moment I first opened the kiln door and found a shiny multi-coloured nugget.’

Catherine creates functional and decorative kiln formed pieces for the home. Her work is distinctively colourful and heavily inspired by print and fabric pattern, she loves experimenting with different shades of colour and combining opaque and transparent glass for exciting light effects.

Ilona Sulikova grew up in Czechoslovakia, attended various University courses and in 1980, she joined a studio ceramics course in Harrogate, and everything fell into place.

“The course was practical and varied, and I enjoyed the combination of working with clay and building and firing kilns,” she says. “We were encouraged to experiment, to be independent, and to develop our own individual style. The joy of working with clay has never left me, despite all the ups and downs that followed.”

Ilona then spent several years living and working in Somalia and Sudan.

“Some of my work there involved the design of small, portable fuel-saving ceramic stoves, to be produced in refugee camps where wood supplies in the surrounding countryside were being rapidly depleted,” Ilona explains. “I worked with local potters, using local clays, and experimenting with many different firing methods.

“In Southern Somalia, I trained with a group of female potters. It wasn’t easy – they put a number of obstacles in my way to test my commitment, but I kept going, and, in the end, I did learn how to produce large water storage jars. The experience taught me the importance of perseverance, of precise craftsmanship, and of having confidence in my own work.”

Coming back to York in the 1990s provided Ilona with a number of challenges, as, in the intervening years, the world of ceramics had moved on. Initially, she returned to making thrown domestic ware. But after a few years, she decided, instead, to modify the hand-building techniques she had learned in Africa, and concentrate on producing large spherical pots.

“Over the last fifteen years the shapes have evolved, and nowadays the pots have become much smaller too,” she says. “I enjoy the quiet process of hand-building, being in control of the pot as it gradually swells, and finally finishing it off.

“At the moment I am using dry copper glaze to paint fairly elaborate geometric patterns on my pots. The intention is to create dynamic sequences of rhythm and movement. In order to achieve fusion between the pattern and the spherical form, all my pieces are raku fired. This also means that I have to surrender some control over the final result which always retains an element of unpredictability.”

Established weaver Jacqueline James specialises in making individually designed and custom dyed hand woven rugs for interiors.  Each rug is made exclusively in her York studio using traditional techniques and durable materials.  She enjoys creating bespoke rug commissions to perfectly match the colour scheme and design style of any interior.

Jacqueline was born in Dumfries, Scotland UK and grew up in the beautiful Pacific Northwest, USA.

“I returned to live in the historic City of York in 1982.  From 1985 to 1988 I studied Woven Textile Design and Construction at Harrogate College of Art and Technology where I focused on rug weaving. In 1989 I established my weaving studio in York where I design and make one of a kind flat woven rugs and wall hangings for commission and exhibition.  Everything is made by hand on my large and sturdy Swedish floor loom.”

Jacqueline has exhibited her rugs throughout the UK.  My work is in public and private collections in the UK and North America.  Major commissions include weaving for Westminster Abbey, York Minster and The British Library.

“I particularly enjoy designing and weaving bespoke commissioned work from private clients, interior designers, architects and places of worship. My work experience also involves running textile-related workshops and arts residencies in schools, museums and galleries. In 1993 I was honoured to be given the Frink Award of Achievement, presented at the Women of the Year Lunch Event in London.  In 1997 I was awarded a Winston Churchill Memorial Trust Travelling Fellowship.  In 1998 received a Theo Moorman Trust Bursary Award for Weaving.”