Exhibition runs until end of  June 2020 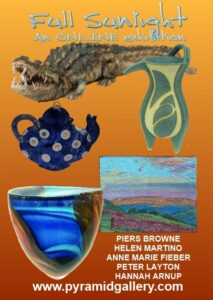 Terry had a wonderful day in Cambridge on Wednesday, collecting new ceramics from HELEN MARTINO

I make ceramic sculptures which embody a sense of narrative. Each piece within a series explores an element of the story through a change in scale, movement, composition or colour.

I am fascinated by body language within both the moving and still image.  I find inspiration, for example, in the exaggerated and stylised movements expressed by actors in silent movies – but equally interesting to me is the way in which narrative is depicted within Mogul and Persian miniature paintings. Here, a still gesture, combined with often intricate and symbolic composition, captures a moment which tells both a past and a future story. My sculptures, often intimate in size, relate to this single moment where great, or small, events in people’s lives are revealed by gesture and communication.

Having been trained as a functional potter/designer it has taken me years to realise that sculptural works, unlike pots, do not necessarily need openings to reveal the inside. I have slowly gained the confidence and the certainty that volume, in a sculptural form, is revealed through the form itself. As a result the volume is all the more powerful because of its containment. In this work I am using this notion of inside and outside, exploring the tension between form, surface, imagination and communication.

For me it is not just the form of the sculpture that matters but also its surface. Here there is the chance to build up layer on layer of texture, pattern and colour that gives each piece its individual character, mood and story. I have been working with print on clay and have been rediscovering traditional methods of printmaking such as lithography and Lino cuts.

I am lucky to be a potter and still to be learning and changing and enjoying my work.

Piers, a  Shropshire-born lad, acquired a love of drawing and painting in early childhood scooter-ing about in those Constable-like lanes  of south-west Salop.

After formal art training, he travelled alone and painted extensively in Europe and for a month in central Africa, before settling in his adopted, equally landlocked  North Yorkshire in 1975:  Wensleydale, especially from a height affords amazing panoramic, unspoilt vistas,  a major influence upon Piers’ life and work.

Essaouira on the more southern coast of Morocco has recently inspired Dawn acrylics and Oils . It was The Alpes-Maritime country ’til then – and before that Kenya, Swaziland then Java but always Provence.

This show includes several recent oils from the many views from near his home above Askrigg in Wensleydale, plus paintings done in Morocco and Lake Como. There are also a few that were done for the illustrated novelette ‘La Route des Violettes’, for which a new edition is to be announced shortly. 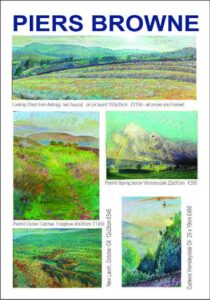 Born in York into a family of artists, Hannah studied both sculpture and ceramics, and gained much of her knowledge from her father Mick who was an accomplished potter and from her mother Sally Arnup who is an internationally acclaimed sculptor. Hannah Arnup now lives on the Atlantic coast of southern Ireland where she runs Ballymorris pottery with her husband John Egan. Hannah specialises in stoneware plates, dishes and vessels on which she applies sgrafitto technique to carve celtic inspired designs into the surface. Her designs are bold and striking against the earthy glazes resulting in beautiful pieces for everyday use or display.

Anne-Marie lives in Salisbury and uses traditional handbuilding techniques to make ceramic animals. While this is her first show at Pyramid Gallery, Anne-Marie has been practicing her art for many years