You are here: Home › Events › Art Exhibition Events in York › Madagascar – an exhibition of paintings and sculpture 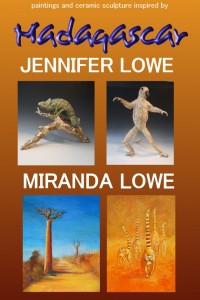 Please join the artists at the opening on

This exhibition of oil paintings is based on experiences in Madagascar from visits in 2005 and 2011. Miranda’s work is influenced by the intense colours and golden light which is typical of October/November before the rainy season. She has been inspired by the Dali-esque appearance of the Grandidier Baobab Trees and aimed to capture their colossal height. The ring-tailed lemurs are set against a background of reddish-orange earth and appear almost translucent – a reminder that the “ghosts of the forest” have had much of their habitat removed by deforestation and are an endangered species.

Jennifer Lowe  has come from an Arts teaching background, (English/Art/Dance) and is largely self taught in sculptural technics. Working from her home near Aylesbury, she produces one off ceramic pieces that focus on expressive posture and movement in animal behaviour. This is the second time that Jennifer has exhibited at Pyramid Gallery, sharing the space with her daughter Miranda, who lives in York.

Exhibition of paintings and sculpture