You are here: Home › Events › Charity Art Events in York › ‘St. John in the Wilderness’ & the Brontës in York, book launch with author Alan Titterington 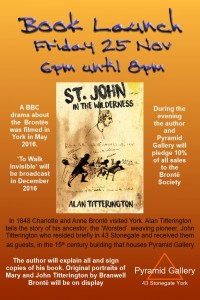 Alan Titterington will be signing copies of his book ‘St John in the Wilderness’ at Pyramid Gallery on Friday 25 November between 6pm and 8.30pm

The book focuses on to his ancestor’s time spent in York, mostly in debtors prison, after moving his family to the building that s now Pyramid Gallery, 43 Stonegate

Did you know that Anne and Charlotte Brontë  visited York in 1848 and came to 43 Stonegate to meet John and Mary Titterington who were residing 43 Stonegate?

We found this out a few years ago when Alan came and visited Pyramid Gallery to research his story. His Great Great Grandfather actually lived in our building for a short while and having been a very close friend to Branwell Brontë,  he knew the Brontë sisters well. 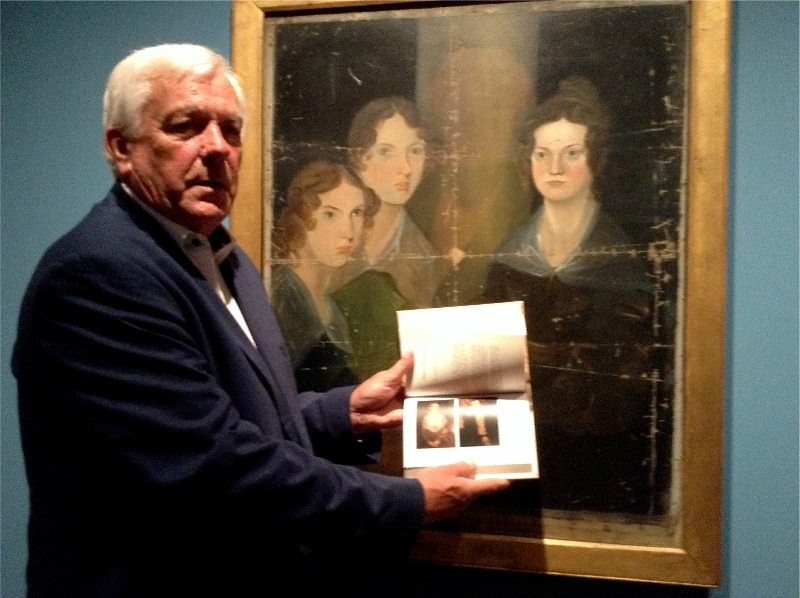 The launch of this fascinating book is timed to coincide with a BBC drama which was filmed in York in May 2016, featuring the Bronte sisters on their visit to York. The drama will be screened in December this year and is called  ‘To Walk Invisible’

Pyramid Gallery owner Terry Brett has read the book and recommends it to anyone interested in this fascinating period of West Yorkshire’s history, when Halifax was one of the wealthiest places in the country  ‘The story is rammed full of interesting historical facts about the wool trade and weaving, wealth, art and literary societies, degenerate behaviour, intrigue and deceit, in a tale that centres around powerful mill owners and intellectual writers. Full of familiar locations around the Calder Valley and Halifax, such as  the Piece Hall where ‘pieces’ of cloth were traded, I found the book to be an illuminating and revealing ‘page turner’.  For me, the knowledge that Anne and Charlotte Bronte called into our building to be received by John Titterington’s family is fascinating.  The 15 century building has always been very special to me, even more so now’       Terry Brett, Pyramid Gallery November 2016 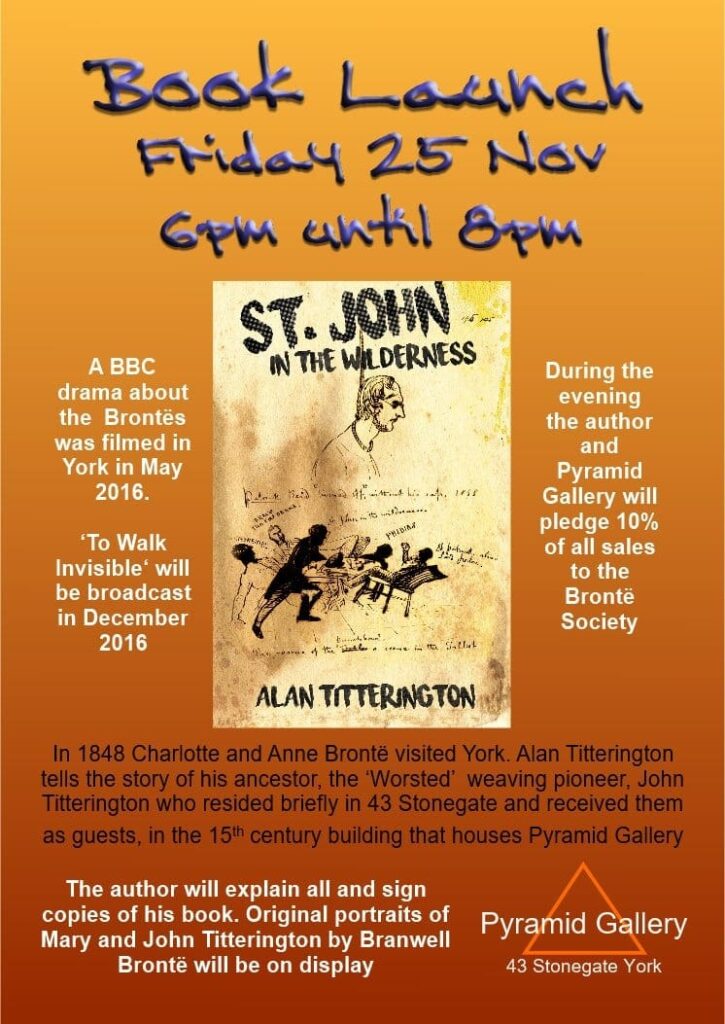 by Alan Titterington. The story follows the decline of the authors Great Great Grandfather into debtors prison in York in 1848. John Titterington lived for a while in 43 Stonegate, now Pyramid Gallery

St. John In The Wilderness

A novel published by Austin Macauley of London, written by Yorkshire author Alan Titterington features the known friendship of his ancestor John Titterington with Branwell Brontë, brother of the famous literary sisters.

The book’s cover, featuring an infamous ‘Hell-fire club’ meeting sketched by Branwell at The Talbot public house in Woolshops, Halifax, in January 1848, identifies its club’s president ‘St.’ John Titterington, complete with devil’s forked tail, at the heart of this creative, some would say debauched, circle of writers, poets, musicians, and craftsmen.

Alan claims controversially in his book that Branwell was a contributor to his sister Emily’s epic ‘Wuthering Heights’, writing some of the darker more dramatic scenes he claims were far beyond the imagination of a parson’s daughter sheltered within the confines of a genteel rural Yorkshire parsonage. Prior to its publication Branwell was said to have been reading extracts from Emily’s masterpiece from his diary in the pubs around Halifax and just such a scene is described in the novel at The White Lion in Mytholmroyd, near Halifax.

Going against previous historians beliefs, including Daphne Du Maurier, and even more controversially, the author claims that Branwell’s dismissal from his tutor’s position at Thorp Green, near York, was not due to a known affair with his employer’s wife Lydia Robinson.

At the heart of the book the flamboyant, extrovert John Titterington, the author’s great-great-grandfather suffers severe deprivation, including imprisonment in the notorious debtors’ prison at York Castle (1848-1850) after being publicly disowned on the front pages of The Halifax Guardian by his own father, yet still manages to recover respectability and stand later as agent for his friend Sir Frances Sharp Powell in his successful bid to become the Yorkshire Northern Area’s member of parliament.

During his time in York and in a vain attempt to escape his debtors he moved with his wife Mary and five children all under ten years of age to live at 43, Stonegate in the city, only to be arrested within a month and transferred to the harsh regime of York Castle debtors’ prison.

Charlotte Brontë and sister Anne, in her dying days, together with their friend Ellen Nussey made one last visit to York Minster on their way to stay in Scarborough, shortly to become the final resting place of Anne, the only Brontë to be buried away from Haworth. The author claims they made a visit to 43, Stonegate to have tea with their friend Mary Titterington and her children, later to be joined by John, by then on restricted day-release from the prison.

In return for friendship and financial assistance, brother Branwell, an aspiring portrait painter, repaid John’s kindnesses by painting oil portraits of him and his wife Mary and the paintings’ 150 year-plus passage from origination in their home at Higgin Chamber in Boulderclough near Sowerby, Halifax into the author’s possession is carefully recorded in the book.

John’s relates his fall from grace in Halifax to a clergyman cellmate during his confinement in debtors’ prison and his early release is aided by a surprise visitor; his own illegitimate and enterprising son William who establishes himself working and lodging in a butcher’s shop in The Shambles, York.

St. John In The Wilderness is available, in both hard or paperback from all leading bookstores or from Amazon books who also offer it in ebook form. 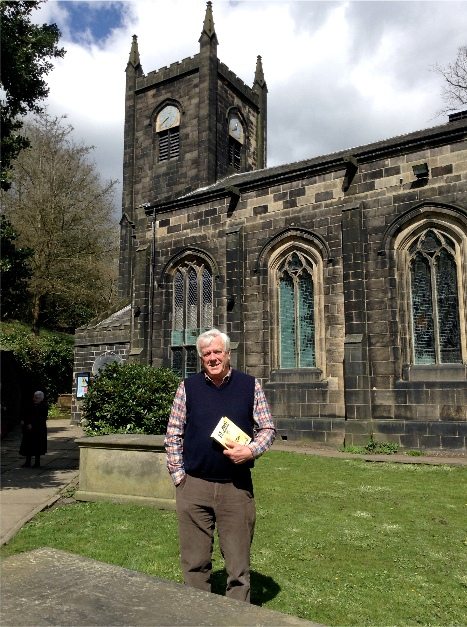 The author at St. Mary’s Church, Luddenden, Halifax, standing by his ancestors’ grave