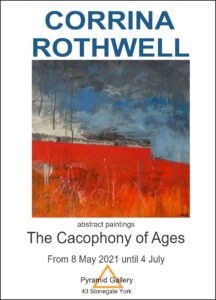 I’ve been a practising artist for most of my adult life. An aborted attempt at academia saw me leaving my European Studies degree in my second year at Hull University in 1989, and I never did get round to doing an art qualification – however I was raised by two artist parents so art was pretty much instilled in me from a very early age.

Until recently I was working as a digital illustrator, designing and publishing my own successful greeting cards range. Prior to this I practised for 14 years as a textile artist, exhibiting and selling machine-embroidered artworks nationally and internationally.

I’ve always loved using paint and have dipped in and out of it (so to speak!) over the years, but never pursued it with any consistency. I believe now that painting is my true calling! I feel more at home and more myself creatively than I have done for a long time. Ultimately I’m a ‘hands on’ kind of artist, and whilst I enjoyed digital illustration the desire to get my hands dirty was too great to ignore in the end.

Over the past 2 years my work’s evolved quite rapidly as I’ve been figuring out what I actually want to say as a painter. Initially I was essentially painting illustrations, which didn’t work. I moved away from figurative work and began focussing on abstract shape and colour, which felt quite uncomfortable and alien to me having always worked with a narrative. Still, I continued to trust my intuition and gradually became more at ease with producing artwork without a story.

Ultimately, however, that lack of narrative has proved itself to be something (subconsciously) I couldn’t ignore and, quite without intent, buildings have started to appear in my work. I say without intent because I didn’t plan to use them – I just answered an urge to put them there. I’m particularly drawn to old factories and urban industrial landscapes and, given that I grew up in the cotton mill county of Lancashire, it doesn’t take a genius to work out where this attraction comes from.

I’m becoming more involved in this concept of history and narrative which has emerged out of my subconscious and into my current artwork, and it’s leading to paintings which I feel good about in my soul, which satisfy me on a deep level. It’s a rich seam to mine, and the exciting thing is that I’ve only just begun!                                  Corrina Rothwell, Nottingham