Jeweller and sculptor ZOE KENDALL will be at Pyramid Gallery between 5.30 and 7.30pm, wine and mince pies will be served 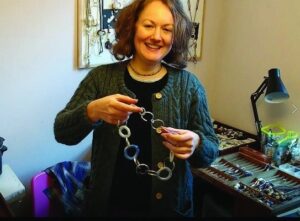 The show also features the work of 3 award winners from the BCTF  awards for excellence. Their prize at the Harrogate Trade fair in April was an exhibition spot at Pyramid Gallery.  The three winners were 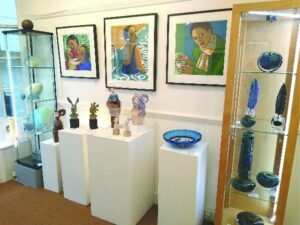 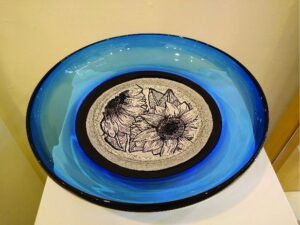 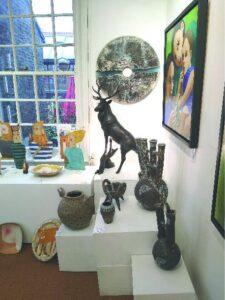 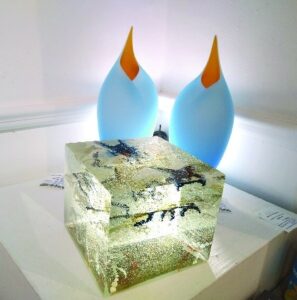 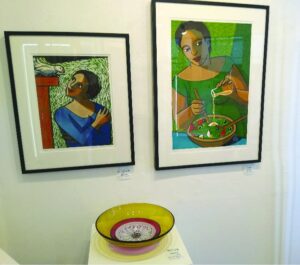 BenArnup is a leading exponent of trompe l’œil ceramics that play with the viewers’ perception of perspective.

Ben’s ceramics are held in international private collections as well as English museums. He has exhibited throughout Europe and the U.S.A. Ben, who studied art at York School of Art, then qualified and practiced as a Landscape Designer, has a workshop based at his home in the centre of York.

Since being awarded the development grant in 2009 Ben has been developing a new style of work in which the naturally coloured clays have been rolled and sliced, re-assembled into slabs and accented with a thin stripe of porcelain and formed into a flattened vessel form. The body of work in this exhibition utilises the marbling techniques that he has developed during this period. All the work has been produced in 2019 at his studio in York

Zoe Catherine Kendall is a London formed, York based multidisciplinary artist and jeweller using paint, ceramics, metals, found and collected objects and a variety of techniques in a broad creative practice.

Her current jewellery and sculptural object collections are inspired by a connection between the historical jewellery adornment of ancient man and more modern hand crafted clay work, including her own family background in jewellery and studio pottery. Working in precious and non-precious metals, different clays, oxides and found materials she explores the inter-relationships between these mediums.

Painting, drawing and photography allow for a more immediate response to inspiration found in the landscape, in other artists’ work and within the narrative of life and relationships. The resulting artwork is sometimes abstract, sometimes illustrative, often guided by language and always seeking to express the vitality of the human condition.

Zoe was originally inspired by an artistic upbringing and family, with a father who has dedicated his career to teaching art, photography and ceramics, a grandmother who made jewellery, a grandfather who led the ceramics and metalwork department at Camberwell College of Arts and a great grandfather, Bernard Leach, who played a significant role in 20th century art, shaping British studio pottery for successive generations.

After graduating from a Jewellery Design BA at Central Saint Martins in 2007, Zoe launched a jewellery collection which was represented by several independent galleries and larger shops in around London including Kabiri, Selfridges, The Last Tuesday Society and Johnny Rocket, receiving national and international press recognition. Since then her practice has become increasingly diverse.

​Other themes in her artwork have included identity, the self and relationships, including confessional pieces exploring the struggles of dealing with trauma and mental illness, and have involved drawing, performance, writing, artifact and artists’ books alongside painting. Combining a range of modalities has allowed for an authentic exploration of interior and exterior worlds, contributing to an immersive body of work that embodies the dynamic relationship between oneself, others and the encompassing environment.​​