Linda Combi will open her charity exhibition of collaged paintings  for the benefit of two charities that support refuges in Syria, : The UNHCR and the Lemon Tree Trust

“The Essence of the world is a flower” 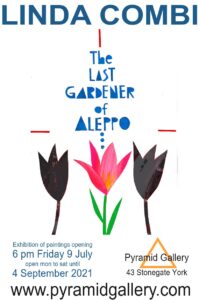 In 2016 Krishnan Guru-Murthy presented a Channel 4 News story titled “The Last Gardener of Aleppo”.  We were introduced to Abu Waad, whose name means “The Father of the Flowers”.  He was a genial Syrian who ran the last garden centre in the besieged city of Aleppo, assisted by his 13 year-old son Ibrahim.

Abu Waad told us of his love of flowers and plants; about how their fragrance, beauty, and resilience were life affirming and joyful.  We watched his large hands gently planting seedlings, pruning trees, and making bouquets of roses for his customers.  Despite the on-going bombardment, the growth and renewal within Abu Waad’s garden made it a “small oasis of colour and life” amid the death and destruction.

The film portrayed the bond between Ibrahim and Abu Waad as they worked together in the garden centre.  We see the father stretched out on an old settee during a tea break laughing with his son; a picture of relaxed contentment.  But one can also detect fear and stress in the eyes of both of them.

The story closes with the death of Abu Waad, killed by a barrel bomb, which landed near the garden centre.  His oasis is now closed, and Ibrahim is left without a father, lost and tearful as he visits his father’s grave.

It is a devastating end, and so it felt important to me to celebrate Abu Waad and Ibrahim and their work in the oasis they created.  I’ve illustrated the words of Abu Waad, which so perfectly describe the joy that plants and flowers can bring to us all.

However, hope returned earlier this year when I was contacted with news that Abu Waad’s son Ibrahim had been found and is living with his sister and an uncle in Syria.  Ibrahim hopes to continue his father’s work as a gardener.  So far we’ve helped him buy a solar energy system.  The Lemon Tree Trust is aiming to help Ibrahim with seeds and equipment for his life as a gardener.  My piece, “Ibrahim’s Hope” was made after receiving this good news.

“A Seed’s Journey” was inspired by the touching fact that many refugees in flight carry seeds of plants from their homeland.

“Desert Flower” and “Despite Everything” were based on an image sent to me from a Californian desert by my sister, of a flower blooming in hot rocky sand.  This flower seemed to me to be about survival and hope despite the most harsh of environments.

I spent 5 happy years of my childhood living in Indio, a date palm oasis in the Californian desert.  It felt important to include my own experience of the abundance of life inside an oasis, and so I made this collage of my hometown, “Indio”.  The oasis is a central theme in all of these works, and I’ve done several pieces on this theme.  “Bird and Flower” is another such image – hopefully conveying a sense of peace and tranquillity.

A percentage of proceeds from pictures and cards will be divided between the UNHCR and the Lemon Tree Trust – a charity that helps refugees create gardens in migrant camps.

Inspiration for the work

I wanted many of the artworks to reflect the Syrian culture and therefore based the designs on a carpet theme.  I’ve heard that carpets bearing a flower design have been used by desert nomads as ‘portable gardens’, acting as a small oasis for relaxation after a day of traveling in intense heat.  This idea resonated with my wish to portray Abu Waad’s nursery as an oasis.

Many of the pieces illustrate the words of Abu Waad.  The   images are about creation, growth, and beauty, but also touch on destruction and death.  The inclusion of bombers, explosions, and fire are inspired by some Afghan carpets that incorporate tanks and guns into the overall designs.  I hoped that the border of destructive images would enhance the sense of an oasis within.

The Kilim designs are distillations of the larger pieces, using elements from them but still based on the words of Abu Waad, and styled once again on the carpet theme.  The central ‘cross shape’ in each isn’t intended as a religious symbol – it comes from a rug design I’d seen in a Tunisian hotel room in the Oasis of Tozeur, and so it seems fitting to incorporate it here. 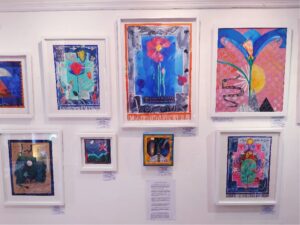 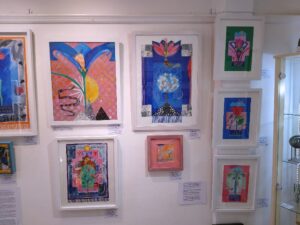 WHERE the MONEY goes…….

Below are some pictures sent back to Linda in 2020, after Linda’s previous money raising show in 2019 at the Angel on the Green she sent $250 that was used by Ibrahim to install solar panels. The images show Ibrahim with the panels and his uncle with boxes, who is Abu Ward’s brother