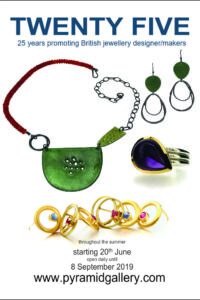 Twenty five years ago, Terry and Elaine Brett purchased Pyramid Gallery on Stonegate, York, taking over from Ann Dawson and Martin Jackson. The business had been started by jeweller Robert Feather in 1982. In 2008 Terry became sole owner of the gallery. Please scroll down the page for a few anecdotes about jewellers and Pyramid Gallery. To mark his 25th year, Terry asked the Pyramid team (Fi, Sarah, Ruth and Samantha) to put together an exhibition featuring  at least 25 of our most popular jewellery designer/makers, and this is the result. The show includes the following makers who have shown their work at Pyramid since 1994:
Robert Feather
Anthony Blakeney
Nick Hubbard
Adele Taylor
Sally Ratcliffe
Claire Troughton
Jill Stewart
Kate Rhodes
Moxon and Simm
Pamela Dickinson
Diana Porter Jewellery
John and Dawn Field

Also in the gallery displays you will see the work of Paul Finch, and Debbie Moxon and Ian Simm who have both had longstanding relationships with Pyramid Gallery, Lesley Strickland and Gail Klevan who make exquisite plant cellulose and acrylic jewellery, Peter Kibbles who is constantly one of our best sellers and Pamela Worthington who has made silver brooches for over 50 years. Ruth Claydon’s work is also constantly on display under the name MOTH and MAGPIE and Katherine Bree has a permanent collection of exotic beaded jewellery. 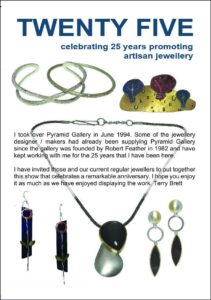 Some stories …..
DEBBIE MOXON and IAN SIMM started jewellery making in Pateley Bridge at about the same time as Pyramid Gallery was opened on Gillygate by Robert Feather in 1982. Pyramid Gallery was their first outlet and they have been represented by Pyramid and Robert in York ever since.  And now their daughter Evie makes jewellery too. As well as a nice selection of Moxon&Simm work, we have some of Evie’s work on display  – CLICK HERE for an example. Evie herself has 2 young children (who knows, we may one day represent the third generation!) Evie’s husband Mick is himself an artist CLICK HERE

KATE RHODES was living on a narrow boat and had a studio alongside the canal at Hebden Bridge when Terry first met her. ‘Just before we got the keys to the gallery in May 2019, Elaine and I were walking along the canal with our daughters and some friends who lived near there. I saw the jewellery studio and introduced myself, saying that we had just purchased Pyramid Gallery in York. Our friends were then amazed to witness Kate put into bags about 30 pieces of jewellery and hand them over to display on a Sale or Return basis. Such was the reputation of Pyramid Gallery, that she already knew about us and took the opportunity to get her work into the gallery’. Kate has supplied Pyramid ever since.  We have sold over 1000 items of Kate’s jewellery over 25 years.

PAMELA DICKINSON was head of  Jewellery Making at York St John’s University in 1994. Within a few weeks of our opening, she came in and asked us if we would offer an exhibition of her students work. There were about 12 altogether. Naturally we said YES, and within a few weeks we displaying beautiful work and selling it. I have never come across a group of students whose work is so well finished and so immediately suitable to be sold as this group of students. Several of those graduates went on to have careers in jewellery making and have supplied Pyramid Gallery at various times. They were very fortunate to have such a dedicated, inspiring and knowledgable artist and jeweller as Pamela.  It was a shame that the university  (known then as York and Ripon St John) decided to close it’s art courses about a year later. However, this did enable Pamela to spend more time making beautiful jewellery for us to display and sell for the next 25 years.

ADELE TAYLOR  supplied Pyramid Gallery with handmade Kaleidoscopes and jewellery on a Sale or Return basis back in 1994.  Most of our jewellers supply Pyramid Gallery on a Sale or Return basis. This enables us to show the makers’ latest designs without risk of it not being so popular as the old favourites (ie a jeweller can put new work in without having to first convince me!) . It also allows us to be competitive in price.     But sometime in 2008, another gallery persuaded Adele to change over to them in the recession, by placing a large order that she could not refuse. We were delighted when 3 years ago, Adele made the obvious but nevertheless risky decision to abandon the other gallery and come back to Pyramid (she had always supplied us with the kaleidoscopes and knew that we were good to our suppliers). She is now one of our top selling jewellers. The other gallery closed its doors in March this year. Thank you Adele, we appreciate the decision you took.

DIANA PORTER graduated from the University of Central England in 1993 at the age of 60. We met her at a trade fair in 1994 and became one of her first galleries . Diana Porter has consistently been our best selling jeweller  for 25 years and was rightly awarded UK Jewellery Designer of the Year in 1999. Her work is always developing and she is regarded as one of the most innovative designers in the UK, employing a team of  some 10 assistants who make jewellery and run the business which includes a highly regarded shop in Bristol. Thank you Diana for continuing to supply us as your York outlet.

NICK HUBBARD was also here as a supplier in 1994, working with his wife Jean as a team known as ‘Brick and Bean’ (Nick and Jean). Sadly Nick died unexpectedly in 2013, yet his legacy is carried on by Jean and his daughters Philippa and Elizabeth, plus members of the team who worked closely with Nick. One of those members is KATIE STONE, who has supplied Pyramid Gallery constantly since 2014 with her own beautiful creations.

SARAH CHILIA first worked for Pyramid Gallery in 1995. Her mum had worked here before that, so at 16 she was well informed about what we do. She took an Art course at York College specialising in jewellery making and we then started selling her work. Later she went to Birmingham and graduated with an Honours degree in Jewellery making and we continued to sell her jewellery whilst she worked part time at Pyramid, eventually becoming Assistant Manager of the gallery in 2007. Sarah became well informed in all aspects of curating and running a craft gallery, and more recently was tempted over to The Yorkshire Sculpture Park and became their Deputy retail programme and product development Manager. We still sell her jewellery and over the years, have sold  over 1500 pieces!