with an exhibition of original linocut prints and paintings by ANITA KLEIN, screenprints by MYCHAEL BARRATT glass figures by HANNAH GIBSON ceramic sculpture by BLANDINE ANDERSON and ANNE MARIE-FIEBER glass by DAVID REEKIE and CARA WASSENBERG and bronzes by ECKHARD WÄHNING. And a Lockdown Dragon fest by MORAG REEKIE. Ceramic creatures by CHIU-I WU. New Glass by LAYNE ROWE  and JAMES DEVEREUX . For Jewellery CLICK HERE

For our Allure! Jeweller of the month MOXON & SIMM Click HERE 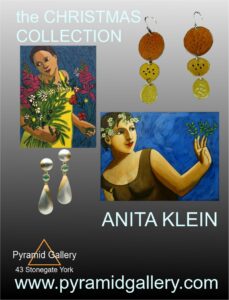 Ravel said he wanted his music to be complex, but not complicated. Anita Klein might say the same of her art. There is a grand simplicity to her works, but that is not the same as saying they lack subtlety and ambiguity. On the contrary, they have the sort of unselfconscious directness that comes from living and breathing art for so long that it becomes second nature.  John Russell Taylor, The Times 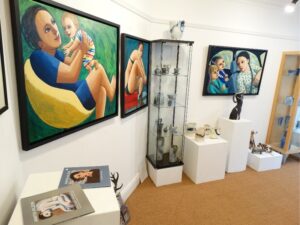 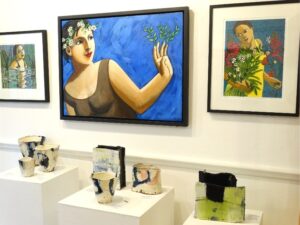 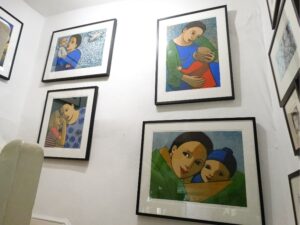 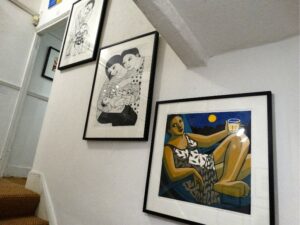 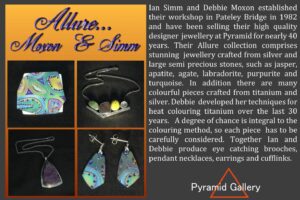 These cast glass and forged mild steel sculptures, Grounded I,II and II are a response to lockdown during April and May 2020

James Devereux specialises in substantial glass forms with a cloven edge, made in his studio near Bath

Layne Rowe is one of the most highly regarded glass blowers in the UK, having been a principal glass blower for Peter Layton for many years. He now produce his own glass ranges in his studio in  North Cambridgeshire

At the beginning of the lock down I came up with the idea of my dragons. Being cooped up and feeling frustrated with our government and their lack of compassion for others and their idleness with controlling Covid, my spiky little dragons came to mind!

The following pieces have been made, but (as of Nov 2020) not yet been collected from the artist. They can be purchased now and will be delivered to the purchaser on Dec 8th 2020